This was a day we had been long waiting for: the day we premiered Darkwave: Edge of The Storm at Pinewood studios for the cast! What was even better, was showing the film in the famous John Barry theatre.

The day started with everyone assembling in a lovely coffee shop in the grounds of Pinewood Studios. I hadn’t personally met Shane Rimmer before, but being a Thunderbirds fan it was great to meet Scott Tracy for real! Shane is a wonderful actor and we were very fortunate to have him play Captain Anderson in Darkwave (screen shot below):

It was lovely to meet Robin Kirwan again (our actor who plays David), who flew all the way from Berlin to watch the film! I spoke to Robin about his expectations, which were all very positive, but even more so after the film… More to come on that.

Unfortunately our actress Nathalie Cox was unable to make the showing, due to being called for another job, though we have assured her she will see it soon!

The time had come, after a quick toilet break, to step into the theatre and take our seats. There is absolutely no sound in the room and I had to remind myself this is industry standard, a room where they show the latest Hollywood blockbusters to cast and crew – it was quite surreal. The lights dimmed and the Darkwave Pictures logo appeared… Although I have seen the film several times already, there was something magical about watching it in the John Barry theatre after being sound mixed by Richard Pryke (Oscar winning sound mixer!)

Succeeding the screening, we made our way to lunch in the beautiful Pinewood restaurant where we all reflected on the film and spoke about the future of the franchise – Phoenix Rising, the feature film, has already been written, so once Edge of the Storm is released to the public, followership will be key for us to be able to approach London investors.

We concluded the day by interviewing the cast; our young actor Ben mentioned his favourite part in the film was when he emerges from the smoke – enhanced greatly by amazing VFX!

Robin: “For me it was the best film experience I have had to date in my career.”

A few photos from the interviews: 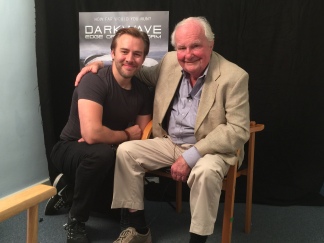 Shane: “I was knocked out. I thought it had the calibre of anything you are going to watch in a movie house.”

The whole day was an enjoyment for everyone, and it was great to be back at Pinewood. A day not to be forgotten.

Darkwave: Edge of The Storm is due for release SEPTEMBER 2016! Keep a look out for behind the scenes videos and more photos in the coming month.

We were really excited to travel to EM-CON, our second Edge of The Storm comic-con, based in the large auditorium in Nottingham. 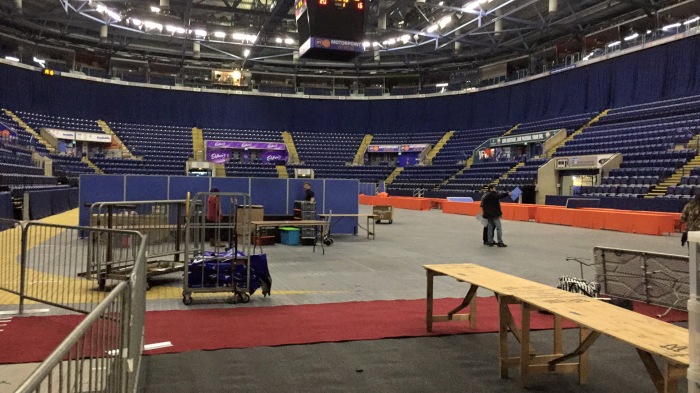 The doors opened for the eager early birds and the auditorium was soon filled with people dressed up in all kinds of cosplay!

Our stand soon attracted lots of attention, especially when the Phoenix roared into sight on the screen. We received many questions such as “Is this a new TV series?” “When can I see the whole film?” “What’s the Universe about?” – fantastic! We loved engaging with all kinds of fans who have a love for all things movie and sci fi. 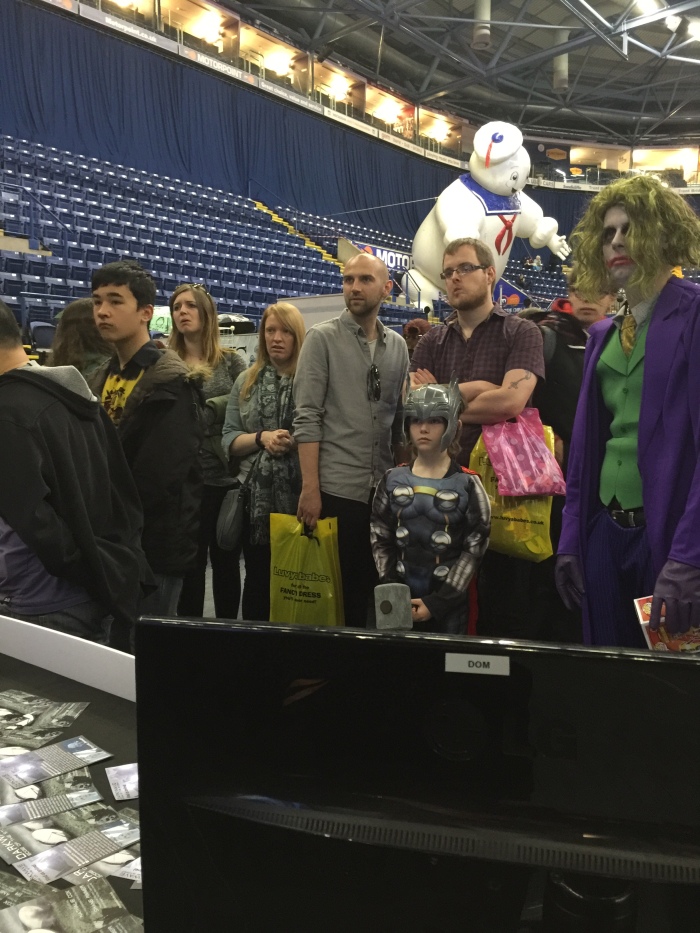 Glued to the screen!

Daz and I met some of the celebs who were busy signing autographs at the event, including Andrew Lee Potts (Wireless), Aaron Douglas (Battlestar Galactica) and Austin St John (Power Rangers)! 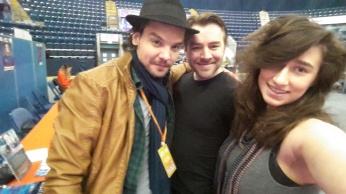 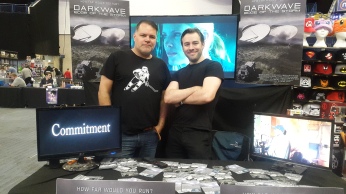 It was pleasing to hear that those above were just as excited about the DARKWAVE franchise as we are!

Overall, a very positive two days at Em-Con, we can’t wait to go back, and this time with the completed film…

It was great to be back at Pinewood again, this time DARKWAVE was among BRIDGET JONES and STAR WARS which were both in production!! Lots of activity, trucks, set pieces and filmmakers about, so it was a buzzing atmosphere!

It was great to catch up with Nick and Al – first time since the shoot! – and we watched the latest edit of Darkwave: Edge of the Storm noting down more scenes we could tighten, and where we can add/remove certain shots. We also discussed pick-ups – there are several shots that are currently just placeholders in the edit, but to strengthen the story, will need to be filmed either at Pinewood, or alternatively in a Lincoln studio which will be decided within the next couple of weeks. There was positive comments about the CGI/VFX which is great news! This is still in development but the guys are working hard and it’s looking good so far.

We were treated to a lovely lunch at the Pinewood bar, and all being film fanatics, most of the conversation revolved around movies – very fitting for the location!

Following the meeting, Daz and I drove into London to reflect on what comes next. The Darkwave Universe (both The Drift and Edge of the Storm) will be at the Leicester Film Festival on the 10th October and more are being planned for 2016. By Christmas, most of the CGI and VFX should be complete which is very exciting!! Also, news about a feature film under the Darkwave franchise is in development…

Sticking with the film theme I feel it’s appropriate that Harry Potter (and not just because I’m a massive fan…) made its way onto the blog!

YES! We arrived by train to London’s Kings Cross and of course we had to visit platform 9 3/4 – Ironically I nearly ran at the wall with excitement! We also had a look in the shop and I admired the over priced £70 jumpers whilst wondering when exactly I’m going to receive my letter from Hogwarts… 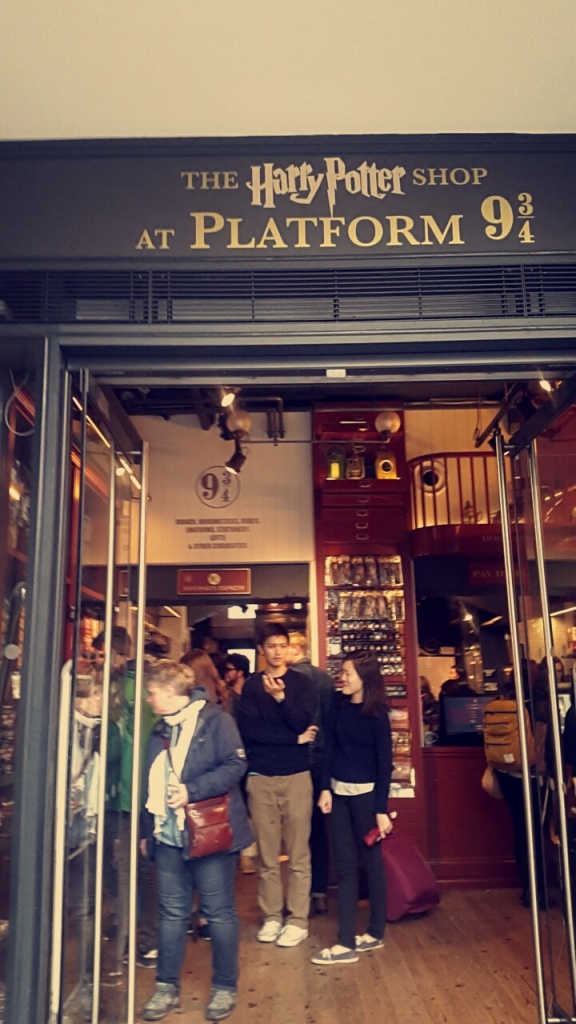 Darkwave: Edge of the Storm is closer now than ever before!!

The inaugural Lincoln Comic-Con was a HUGE success; hundreds of Sci-Fi and Fantasy fans both locally and from afar gathered to share and showcase their interests and impressive outfits: 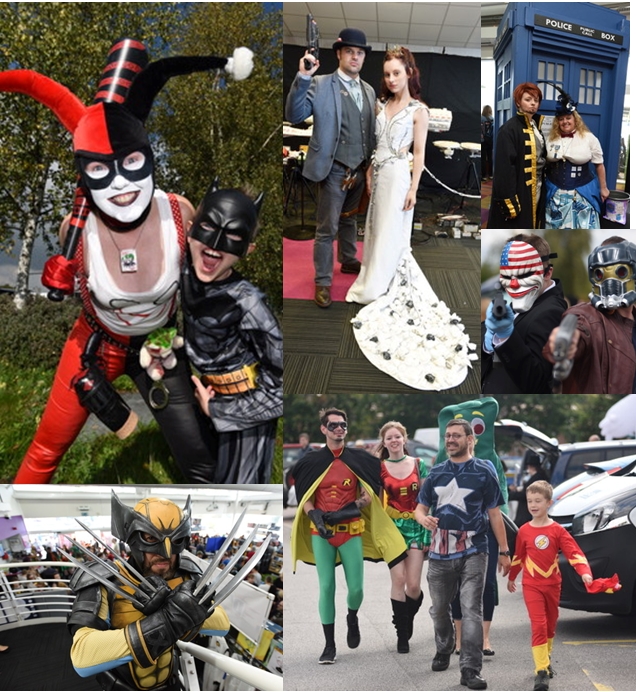 Sci-Fi authors, independent stalls and merchandise sellers filled the whole building, and among those was THE DRIFT! (The feature film that precedes the Darkwave: Edge of the Storm story.) We arrived early and began setting up our space, which included the impressive model of The Deliverance, pictured below, which gathered lots of interest from professional and fan photographers! 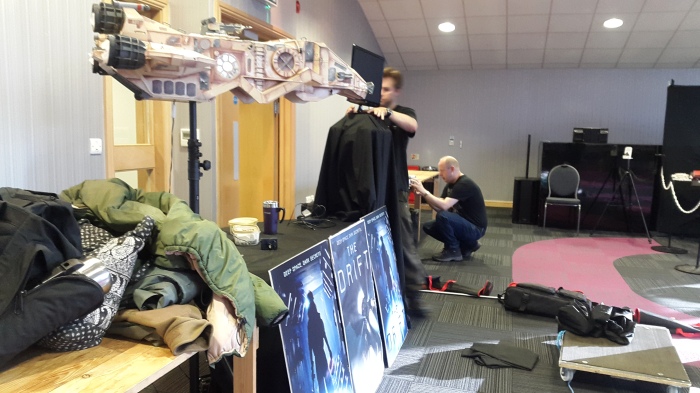 Below, myself and Daz set up and ready to welcome the influx of fans!! A cup of tea shortly followed this photo!

It was lovely to meet some locals who had already seen and read articles about the film, and (as pictured below) introduce other Sci-Fi fans to the Darkwave Universe.

The most frequently asked question throughout the day: “So, The Drift was made for only £5,000?… It looks really professional!”  – this is certainly promising, especially as Darkwave: Edge of the Storm was filmed on the Arri AMIRA and Sony F3 camera, a step up cinematically from the DSLRs used on The Drift.

The photo below was taken an hour after the doors opened and the queues were still out of the door!

Overall, the Lincoln Comic-Con was a really successful day. We sold all but two DVDs, and building on previous sales, the money will go to Charity.

Both days are going to be action packed with all things Sci-Fi so if you’re around, make a note in your diary because the Darkwave Universe would love to see you!

Alarm set – 6:30am. Not quite the 5:15am alarms I had set for the film shoot, but still early. However, time didn’t matter. Daz and I were heading to London!!

We had two very productive meetings, in discussion about the current Darkwave edit and our plans moving forward – exciting times to come! It was a long day but the weather was sunny (untypically British I know) so we made the most of the time we had and when not in business mode, embraced the urban atmosphere, trying not to appear too much like tourists…

The city of London, by night

In the excitement of seeing an advert for Spectre on the big screen (not long now!), it would seem I struggled to take a non-blurry picture. Nevertheless, this is Leicester Square! 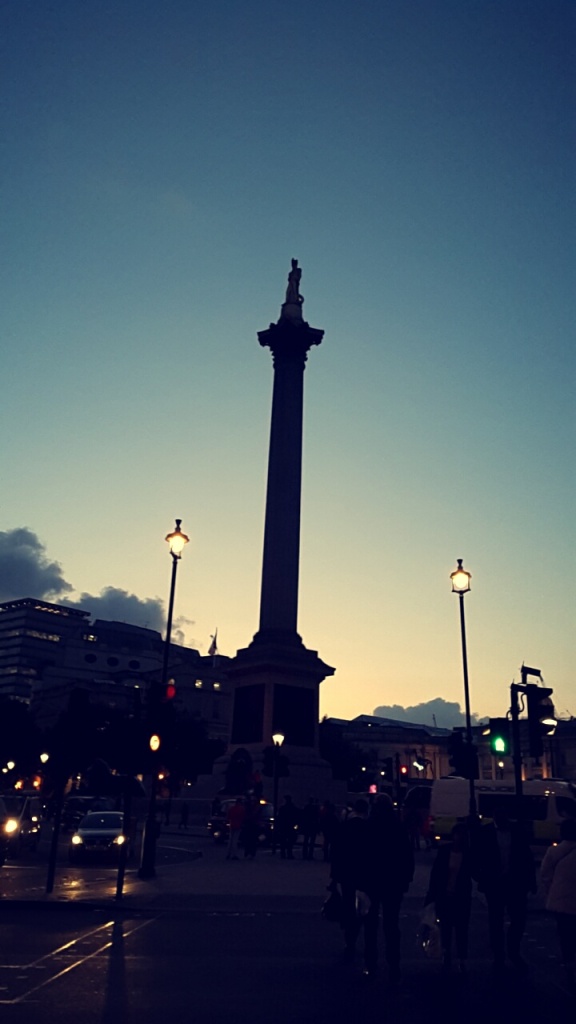 Darkwave: Edge of the Storm is now on IMDb!! Hoorah! Check it out:

Even though Daz is working remotely for the next few weeks, editing has officially started!!!

…which means we will shortly have the first storyboard edit – remember to keep linked to us via our social media sites!

Over the past two days I’ve been logging all of the filming files which of course meant I’ve had the chance to look at the footage, and no spoilers, but it’s awesome!! We had three cameras and three audio channels that needed matching up so it was a time consuming task, but many many cups of tea and coffee later, it’s now complete!